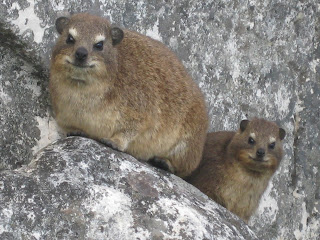 Mammals used to be a common sight on Table Mountain back in the day, but man’s encroachment reduced them in numbers and species. Except for one: the ubiquitous Rock Hyrax, locally known as the Dassie (from Old Dutch dasje, meaning ‘badger’) – a brown, furry creature resembling an earless rabbit, and therefore also referred to as a Rock Rabbit.

Despite their nondescript appearance, these squat little mammals should not be dismissed as a mere mutant rodent or feral guinea-pig. For starters, they’re the closest living relative to the modern-day elephant and sea cow. All three animal groups – elephants, sea cows and Dassies – descended from a common ancestor millions of years ago and therefore share physiological similarities in teeth, leg and foot bones. Not surprising then that the Dassie was awarded its own order (Hyracoidea).

Rock Hyraxes occur in rocky habitats across Southern Africa, North Africa and the Middle East. The nooks and crannies of Table Mountain provide the perfect habitat, offering easy escape from their arch-enemy, the Black Eagle. They live in colonies of up to 80 individuals, divided into several families (harems) comprising 3 to 15 adult females, a single dominant male and several young. Several colonies inhabit the rock ledges around the upper cable station, where they are often seen basking in the morning sun. Older individuals have become tame from long exposure to humans and human feeding. It is not allowed to feed the Dassies; their habitat contains ample food sources (flowers, bulbs, roots, grass, sometimes insects and grubs) and they don’t need the likes of crisps, sweets and bread for sustenance. They can survive for weeks without water in that their fluid requirements are largely met by their diet.

The Rock Hyrax’s plump appearance belies its agility. Sure-footed and endowed with a good head for heights, they can often be seen scurrying up near-vertical terrain and across exposed ledges with consummate ease, seemingly insensible to the risk of falling. The soles of their feet consist of soft pads kept moist with a sticky secretion that facilitates heat loss and provides traction on rock surfaces, aiding in their agility.

Dassies love to bask in the morning sun due to poor heat-regulation and a low metabolism. They rely on sentries, posted on vantage points, to warn them against danger. A sentry’s high-pitched bark sends the colony scurrying for safety among nooks and crannies. Black-eagles pose the greatest threat and usually attack from the direction of the sun, making use of the blinding light to avoid detection. Evolution has provided Dassies with a unique membrane over the eye that shields the pupil against the sun, enabling them to spot attacking eagles. The Hyrax’s unusually long gestation period (230 days; compared to the much larger Impala’s 196 days) suggests that Hyraxes the size of oxen once roamed the earth – hardly prey for an eagle.

Rock Hyraxes produce large amounts of hyraceum, a sticky mass made up of dung and urine. This petrifies over thousands of years into a rock-like material known as Africa Stone, used in traditional South African medicine for treating epilepsy and seizures. It is also used in perfumery for its complex, fermented scent combining elements of musk, civet, tobacco and agarwood.

Although a common sight around the upper cable station, Dassies are best appreciated when encountered on a hike up Table Mountain, where the presence of people and buildings do not detract from the experience.