The highest point on Table Mountain

Despite its flat summit, Table Mountain does have a high point. Not exactly a peak or lofty spire, but a humble outcrop elevated 20-odd meters above the surrounding landscape. Marking the spot is a 3-meter-high stone cairn known as Maclear’s Beacon.

With most of Table Mountain’s summit plateau located at around 1065 meters (3500 ft) above sea level, the terrain at Maclear’s Beacon ticks up to 1088 m (not including the cairn), making it the official summit of Table Mountain as well as the highest point on the Cape Peninsula. Its location near the eastern edge of the ‘Table’ – about 40 minutes’ walk from the upper cable station – means that very few visitors to Table Mountain actually get round to it.

Despite the unremarkable topography around Maclear’s Beacon, the place offers exceptional views not seen from the upper cable station. The view across the tabletop reveals the lie of the summit and gives one an appreciation of how flat it really is.

So who was Maclear? In 1834, Irish astronomer Sir Thomas Maclear (1794 – 1879) was appointed Astronomer Royal at the Cape. In 1844, as part of his measurement of the Meridian Arc, he supervised the construction of a rock beacon at the highest point on Table Mountain. It formed one of his three major survey points and was painted lamp-black to make it more visible.

In subsequent years, the conical beacon crumbled into a shapeless heap, but was restored in 1979 (using the original stones) to commemorate the centenary of Maclear’s death and has since been declared a National Monument. Nearby is a brass toposcope as well as the Mountain Club of South Africa War Memorial that commemorates the nine Club members who died in the First World War. 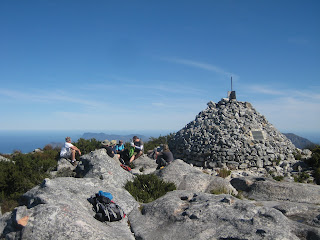 Maclear’s Beacon serves as a fitting climax to a hike up Table Mountain. Most routes on the mountain can be altered or extended (by less than an hour) to include this superb vantage point. Views aside, it symbolizes a sense of achievement – a point of reference to our efforts at scaling a mountain. Then there is the spiritual dimension of beacons, as the following passage from the 1938 Journal of the Mountain Club of South Africa reminds us:

“If weather and other circumstances permit, time must be spent at a beacon. The outstanding days are those when we have eaten, and lazed, and sunbathed at the beacon itself for two or three hours. A vivid memory is associated with three and a half hours spent on a high summit on a calm, silent, perfect day. The summit beacon is a special place with a special atmosphere, and to understand that atmosphere we must be still and take time to receive what the mountains have to give us. There, in a special way, our beings become saturated with what has so often been described as the Spirit of the Mountains.”

Hike Table Mountain offers hikes to the summits of all the peaks on the Table Mountain massif, and there are many. Whether you’re in it for the views, the challenge or the ambience, setting foot on some of Table Mountain’s summits is an experience not to be missed.